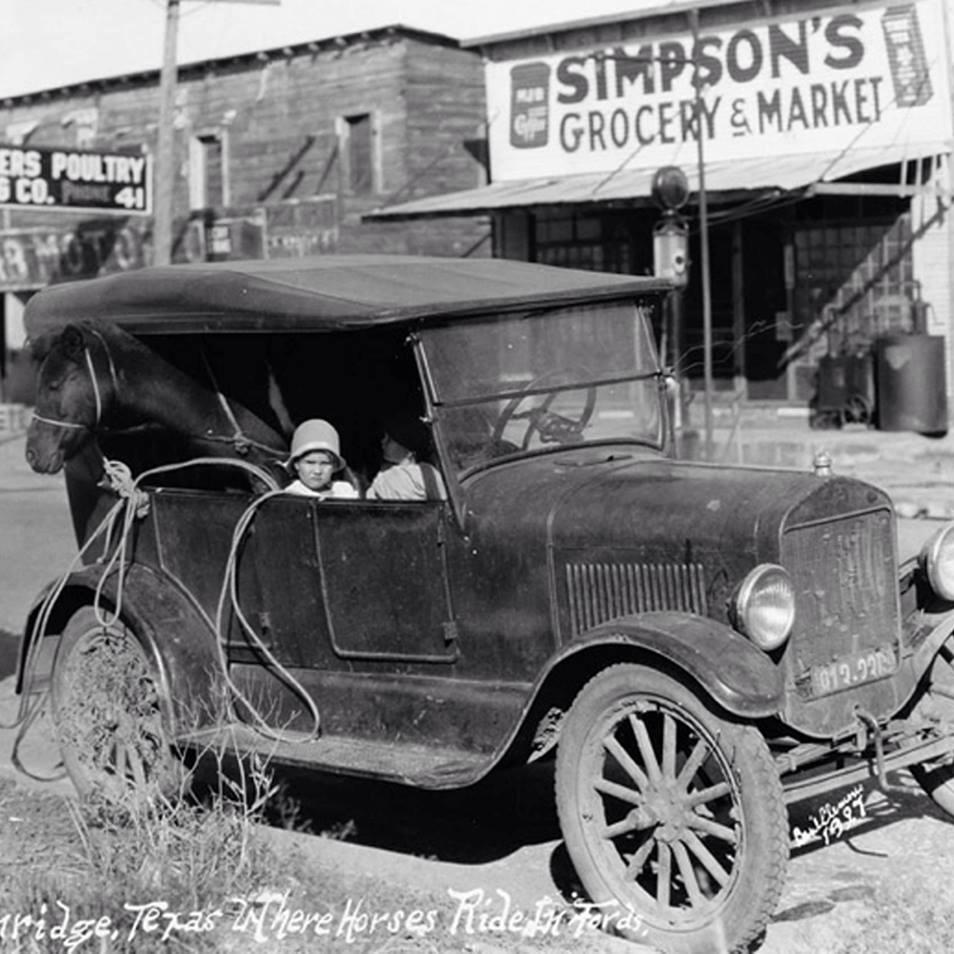 An early 1926 touring – notice the headlight mounting arrangement with no headlight cross bar – with an unusual passenger in the back seat. The new 1926 – 27 Fords were “built Ford tough” as the saying goes. 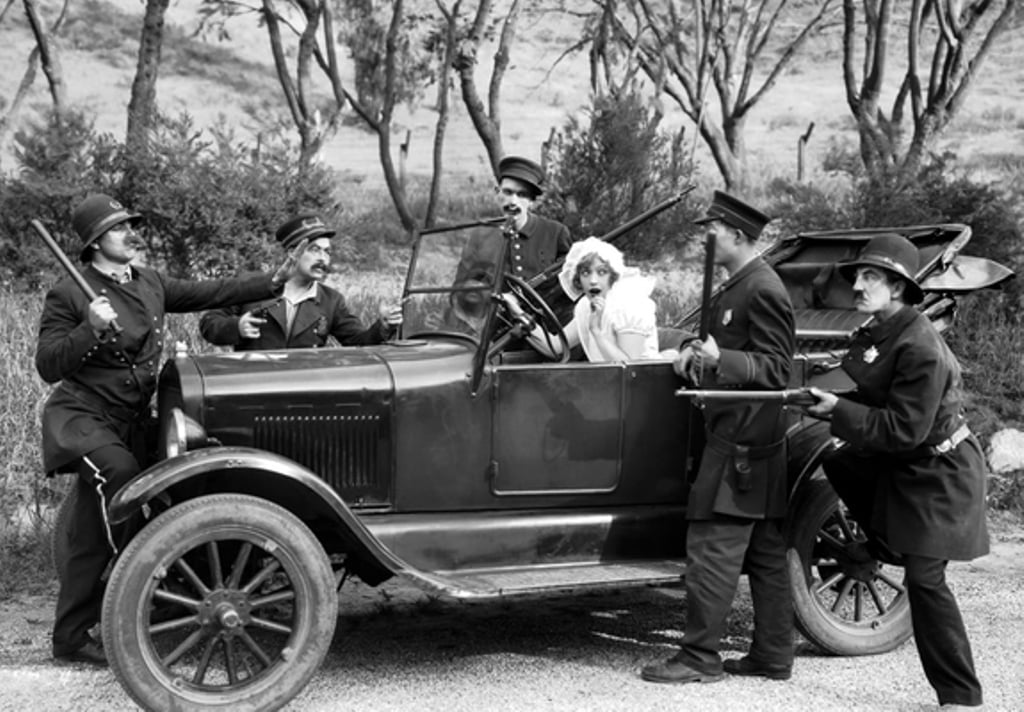 The Keystone Cops and Mack Sennett comedies were a staple of American movie theater short films for much of the early 20th century. Here we have a nearly new 1926 touring. Notice the difference in the body color compared to the hood and front fender. 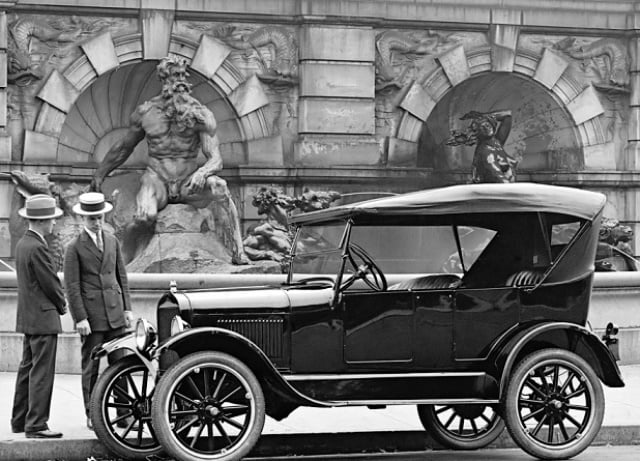 Another photo of an early 1926 touring, photo property of The Henry Ford. This car has the optional rear combination brake lamp / tail lamp.

Above and below – A close up of the optional stop / tail lamp. The lamps were furnished with wiring and a brake lamp switch that was activated when the brake pedal was depressed. The lamp is designed to bolt on to the original tail lamp bracket in place of the standard single bulb lamp. 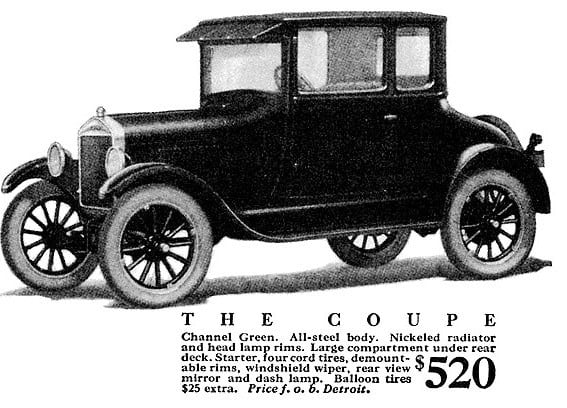 The coupe was well equipped from the factory in 1926, with nickel radiator shell and headlamp trim, rear view mirror, dash lamp, electric starter / generator / battery, and as the advertisement carefully states “four cord tires”. A spare tire rim was included, but you had to pay extra for the tire that went on it.

The touring in the advertisement is not the touring that you could buy for $290. Ford was the only United States car manufacturer who still made cars with no electric starter in 1926. Enough were sold to make it a profitable part of the business. If the car above were a “non – starter” version it would have non – demountable wheels, no spare wheel carrier, and kerosene tail and cowl lamps. 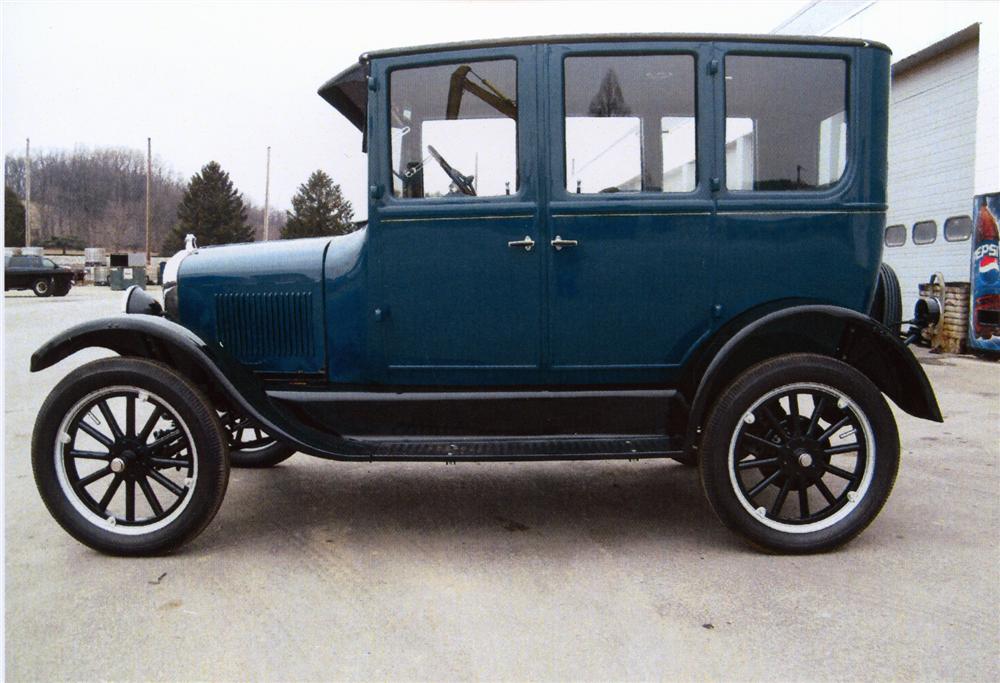 The Fordor sedan body style was basically carried over from 1925. Changes for 1926 – 27 included a cowl mounted gasoline tank and restyled fenders and splash aprons. Nickel plated radiator shell and headlamp trim rings were standard, as were 6 volt electric starting and lighting equipment. The price of the Fordor sedan changed twice during the 1926 model year, starting at $660, then dropping to $565, and finally to $545 by the end of the 1926 model year in June 1926. 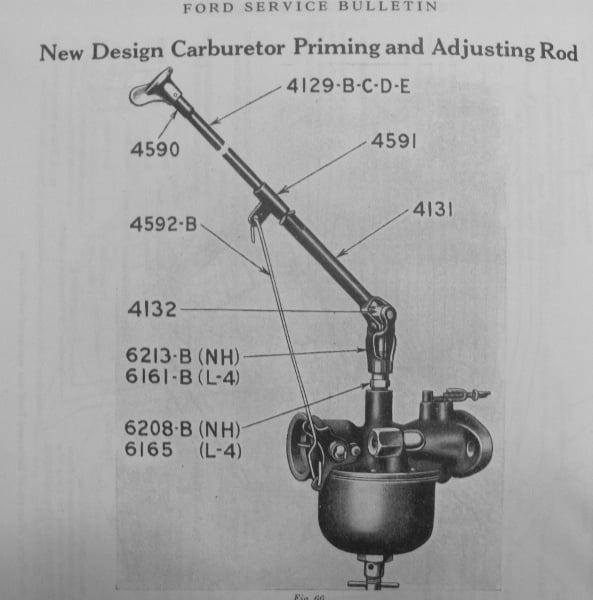 Ford simplified and improved many things on the 1926 – 27 Improved Ford. Here we see the mixture and choke linkage that was used with the Holley NH and Kinston L4 carburetors at the beginning of the model year. The carburetor illustrated above is the Holley NH.

The beautifully restored 1927 engine above is equipped with the 1927 only Kingston B1 Regenerator. Note that the original fuel line was made from brass, copper is not safe for use as a fuel line and should be replaced with steel or brass. The Kingston Regenerator and the similar – and much more common – Holley Vaporizer carburetor / intake / exhaust design was an attempt to compensate for the poor quality gasoline of the era. By 1925 motor car manufacturing and sales had outstripped the ability of the petroleum industry to supply fuel. Gasoline quality suffered, octane was decreasing as more gasoline was needed for ever more cars and trucks. 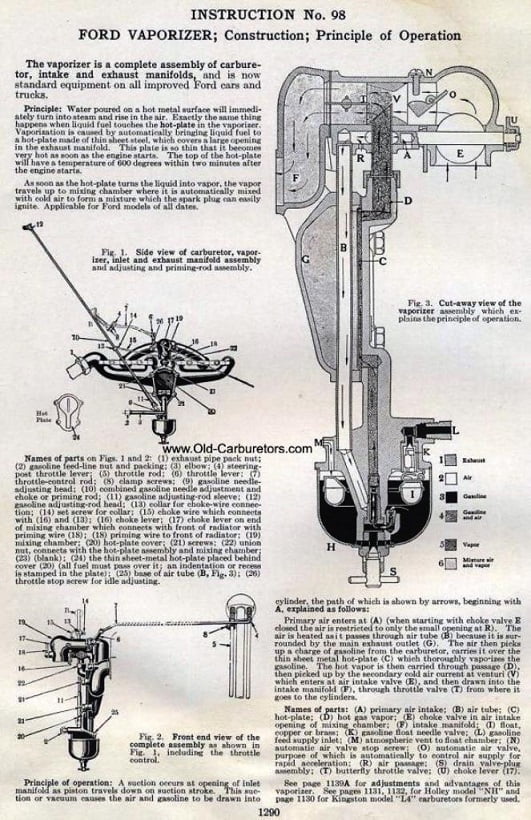 Above, the Holley Vaporizer. 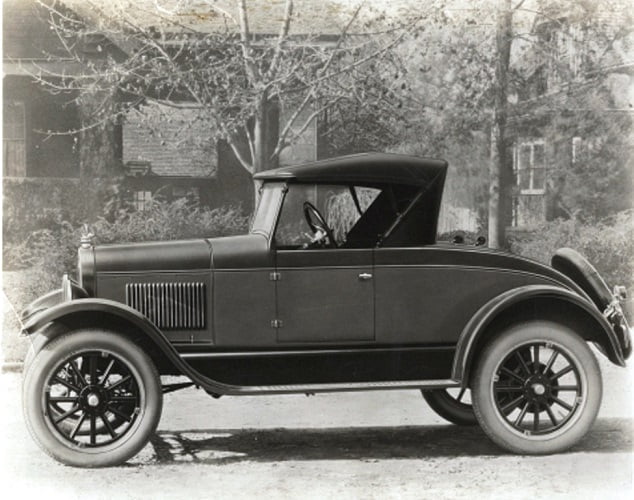 Aftermarket body suppliers were quite busy in 1926. Above and below, Autowa body kit made in Ottowa, Illinois was a snazzy improvement over the standard Ford body. The Ottowa body company offered several body styles for the Model T including open and closed cars. 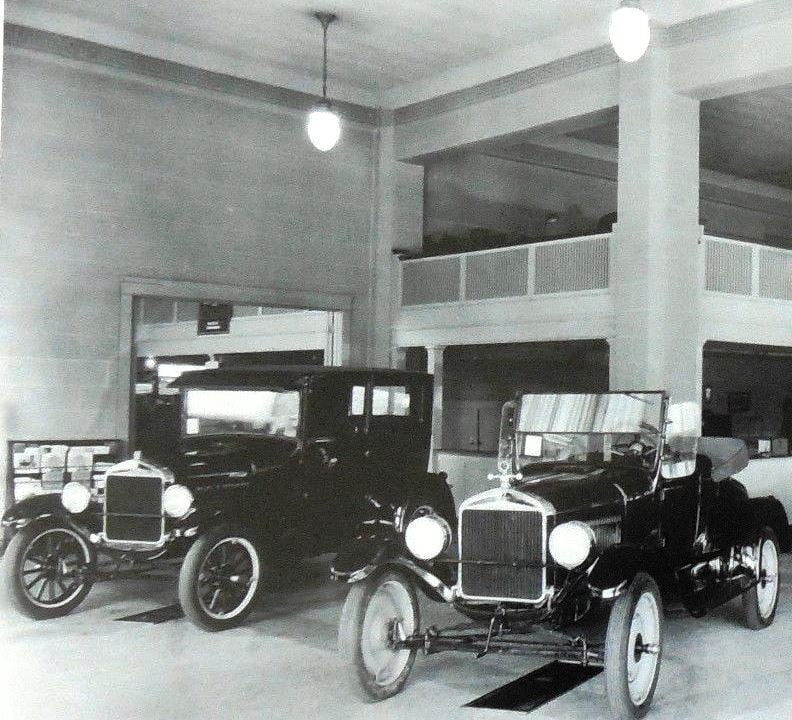 Above, a dealer show room in 1927. The roadster on the right is “dolled up” with drum style headlamps, wind wings, and disc wheels, along with an optional hand operated windshield wiper. The tudor on the left appears to be equipped as Ford produced it. 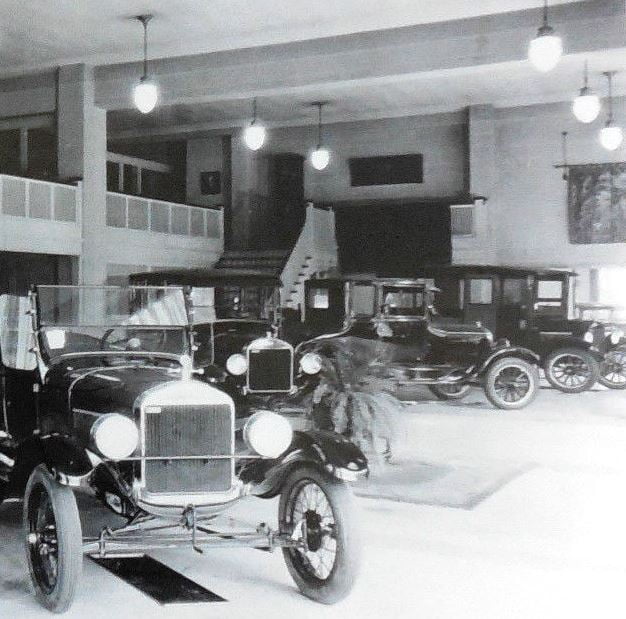 Looking to the right in the same show room we see the touring, Fordor Sedan, Coupe, and TT truck with enclosed cab. The dealer has wisely placed drip pans under each vehicle, Model T’s leaked when they were brand new! 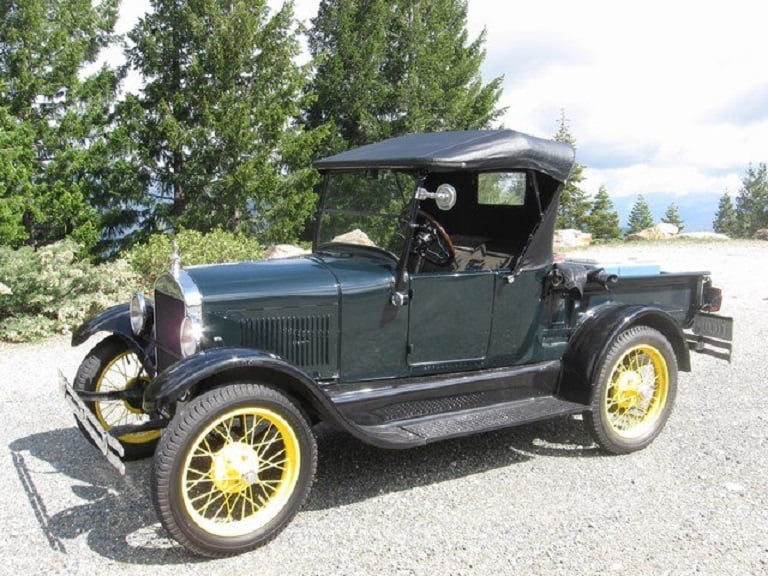 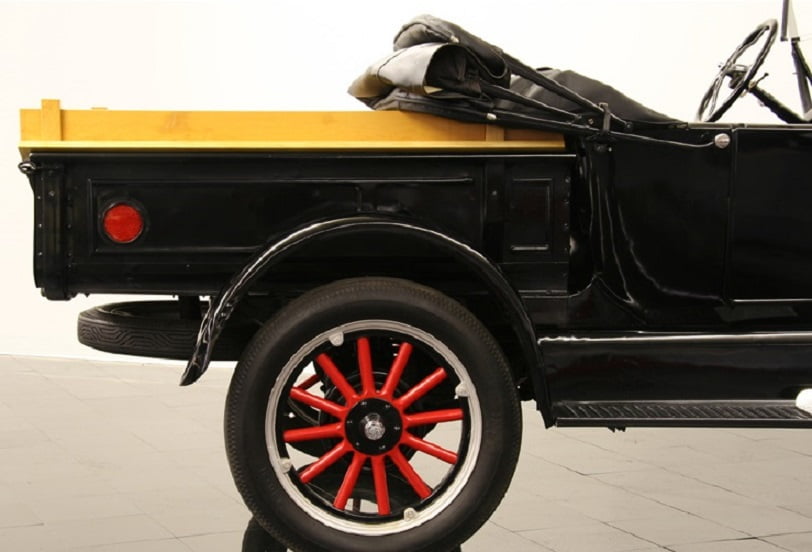 Above a 1927 roadster has been converted to a roadster pickup by substituting the pickup bed for the roadster trunk. Note the aftermarket accessory spare tire carrier below the bed, a very useful accessory.

Above, a 1927 roadster pickup in nearly new condition has an unusual set of aftermarket wire wheels. 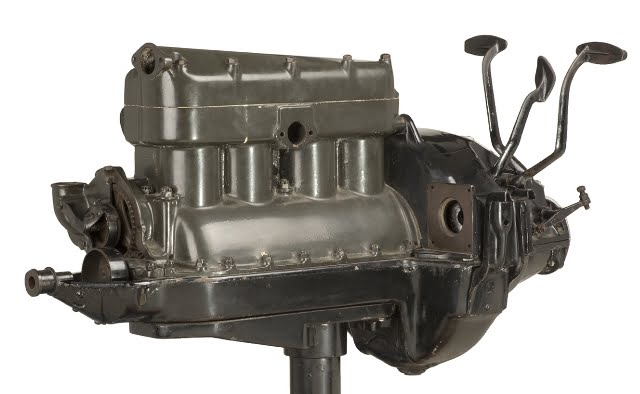 The engine / transmission for the 1926 – 1927 Fords was improved in several ways. Notable was the increased brake drum in the transmission which allowed for a larger brake band, a significant improvement. Because of the larger brake band the hogshead was modified with a relocated brake pedal location. The brake pedal and low pedal were made wider and spread apart further than earlier Model T’s. This allowed much easier operation of the pedals. The engine above is in the Henry Ford Museum in Greenfield Village, Dearborn Michigan. The engine block is painted in the original Ford “Moleskin Green” which was another change for 1926. This is not the same color used on Model A Ford engines. 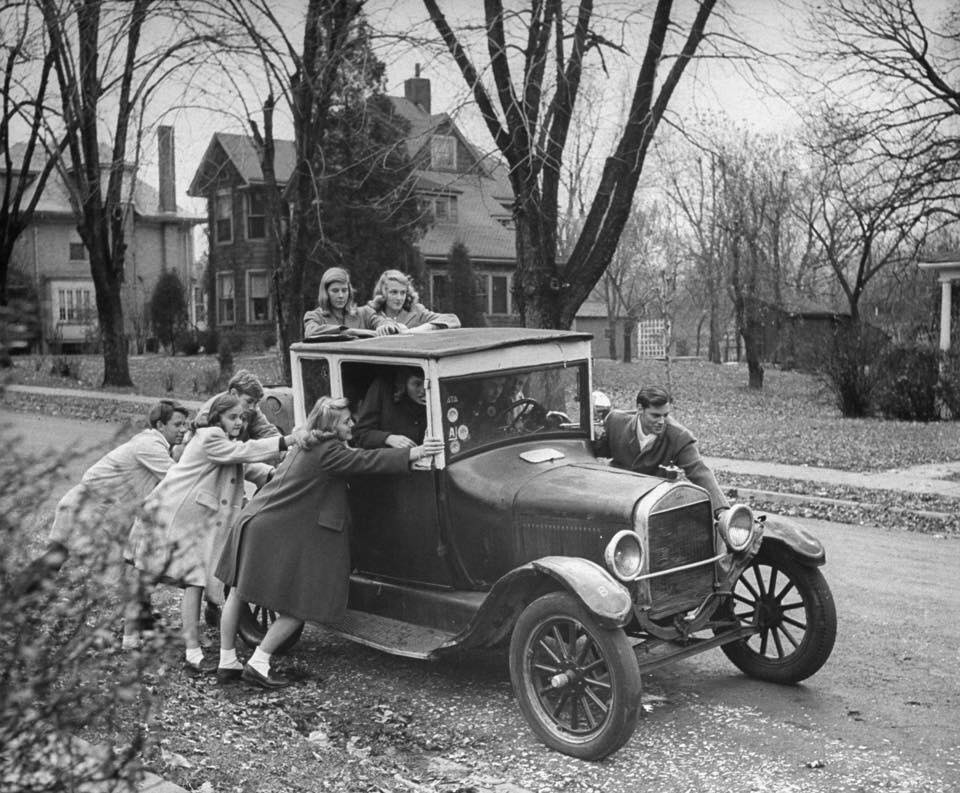 The college students above are push starting the Model T of a friend. The 1926 – 27 Model T Ford bodies were greatly improved from earlier Model T’s. They were built with very little structural wood (the Fordor sedan being the exception to this statement). Many were used well into the 1950’s as cheap transportation, often by new drivers or college students on a tight budget. Many Model T’s were used at military bases and sold from one serviceman to the next as people were reassigned to different bases or battles. 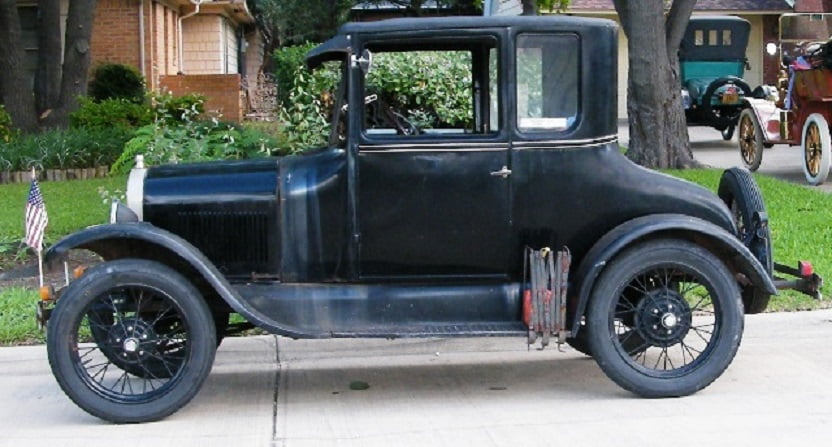 Above and below, our late friend Victor Gumma bought his 1927 Model T Coupe when he went to college in the early 1950’s. Unlike many students, he kept his Model T for the rest of his life. It continued to be used as transportation and in parades in the 2010’s. The above photo taken in 2012 in Dallas, TX. 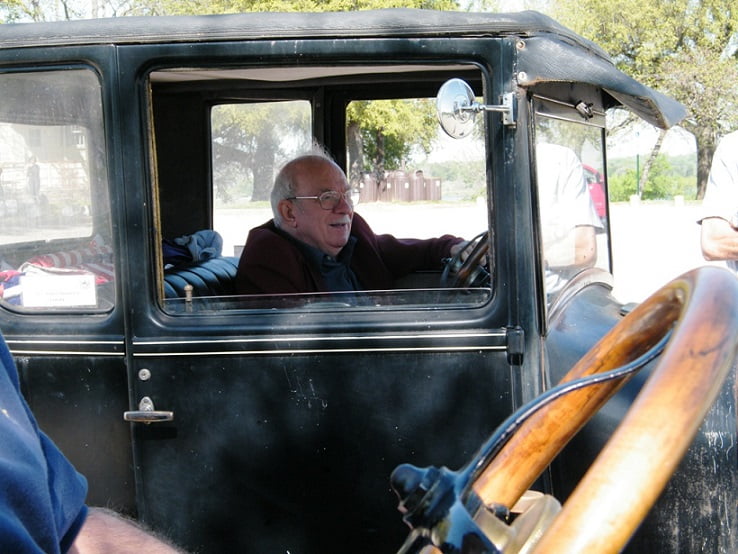